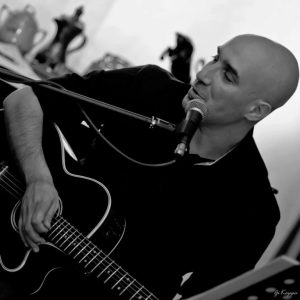 Singer and songwriter. Performer of readings and of musical-literary projects. He recorded his first album in 2007 (“Beppe Giampà”), whose songs are included in various compilations, in Italy as well as abroad, and broadcasted by various radio stations. In 2009, he recorded his second album (“…e il sentimento brucia” – and the feeling burns) in the United States at the Santa Monica studies, in collaboration with Giovanni Lodigiani, a composer of musicals and movie soundtracks for the American market. Fond of stories and folk cultures, in 2011 he dedicated a song to the Bandit Delpero, a famous brigand of the mid-800 of the Langhe and Roero. From 2012, his artistic activity becomes increasingly engaged, combining the composition of songs with literature. That same year he publishes a new album (“I Mattini passano chiari” – The mornings pass clear) setting to music some poems by Cesare Pavese from the book “Verrà la morte e avrà i tuoi occhi” – Death will come and it will have your eyes. The album later became a play about the last night of Cesare Pavese, in which Giampà participates as an actor alongside of Roberto Accornero and Barbara Forlai. To preserve its poetic intimacy, the concert presentation of the album is proposed in acoustic version, alternating the musical interpretation of the poetry of Pavese with some readings from “La Luna e I Falo’ “– The Moon and the Bonfires, and “La casa in collina” – The House on the hill. With this project, he obtains wide acclaims in literary cafes, clubs, literary festivals, theaters in Italy and abroad (Germany, Austria and Belgium). The show later became the bridge between the literary relationship to the land (Langhe and Monferrato) and the period of the Resistance through the words of Pavese and Calvino. Recently, in collaboration with the journalist and writer Daniel Biacchessi, he launched a new musical-literary project dedicated to the most important literary works narrating the period of the Italian Resistance (“Memorie Letterarie nelle Resistenza” – Literary Memoirs during Resistence). His latest album is called “Della Fatal Quiete” – Of the fatal tranquility, where he set to music some poems by some of the most important poets of the Italian literature (Foscolo, Leopardi, Carducci, Pascoli and Campana). In 2016 he wrote “Canzone per Fausto e Iaio” – Song for Fausto and Iaio, which, together with the songs of Gang, Massimo Priviero and Gaetano Liguori, will be the soundtrack to the film coming out in December 2016 of “Il Sogno di Fausto e Iaio” – The dream of Fausto and Iaio, loosely based on the book of Daniel Biacchessi “Fausto e Iaio, la speranza muore a diciotto anni” – Fausto and Iaio, hope dies at eighteen (Baldini &Castoldi).